When Lindsay Whitehouse decided to give entrepreneurship a shot, she chose to go into debt rather than ask her family for cash to help her.

“I wanted to be independent. I don’t like asking anyone for financial help,” she said. Her mother still played a vital role, though.

A bad credit score meant Whitehouse’s bank refused to give her a loan to help set up her hairdressing business, but she learnt there were ways to bypass the high street institutions.

She secured £1,000 from Amigo Loans, an online lender, which rather than demanding a strong credit history, requires a friend or relative of the borrower to guarantee that repayments will be met.

Whitehouse, 28, from Cannock, Staffordshire, used the loan to buy supplies and rent space in a salon. If she fails to pay £50 each month for the next three years — £1,800 in total — it is her mother who will be in the line of fire as she agreed to act as guarantor.

“It’s OK, mum trusts me,” the hairdresser said. “The interest is a little more than a normal loan but it’s not extortionate. I’m building up my client base before opening my own shop, and I would use Amigo when I need money to open up a salon.”

Amigo has attracted 120,000 customers and lent £450m since it went live in 2005, even though its interest rate is equivalent to 49.9% a year. It claims that less than 10% of borrowers have had to fall back on their guarantors.

Over the past 18 months, about 7,000 entrepreneurs and sole traders have borrowed a total of £20m from the company after being turned away by banks — less than £3,000 each.

In spite of the cost, and the potential for family rifts in the event of late payments, it is proving an increasingly popular source of funding.

“Our research shows that, on average, micro-businesses need just £2,143 to set up,” said James Benamor, who founded Amigo. “A knee-jerk response to the credit crunch has been that banks tightened their credit scoring to remove less profitable clients.

“Unfortunately, entrepreneurs, especially those running micro and start-up businesses, tend to score low on profit-driven credit scores, either because they are likely to repay their finance early, or because they have very little credit or income information.”

Amigo Loans is part of a new wave of lenders offering guarantor loans. One of its bigger rivals, 1plus1 Loans, claims to have lent more than £10m since its launch last year and to have 300 sole traders on its books. It also charges 49.9% APR.

The burgeoning market has been cautiously welcomed by the big banks, which are still coming under fire for not lending enough to small businesses.

Although the rates are higher than those from the high street institutions, they are much more reasonable than the cost of borrowing from payday lenders such as Wonga.

Amigo Loans is bankrolled by Lloyds Banking Group and Royal Bank of Scotland, the taxpayer-backed lenders. About 40p of each £1 lent by the company comes from facilities provided by the two banks.

Credit scoring systems used by the banks have been widely blamed for stifling the flow of funding to start-ups and driving entrepreneurs to these costlier alternatives.

The problem was acknowledged by the government with the launch of the Enterprise Finance Guarantee Scheme. It offers from £1,000 to £1m to small and medium-sized businesses that have been rejected by banks because they are too new to have a track record, or they lack security.

The Department for Business, Innovation & Skills guarantees 75% of each loan under the scheme, which runs until April 2015. Lending totalled £84m in the second quarter of 2013, the highest since March 2011.

A modest rise in lending to non-financial companies in July has fuelled hopes that banks are becoming more prepared to lend to businesses and that the Funding for Lending Scheme may be starting to have more of a positive impact. Start-ups, though, will still have to fight hardest for help.

Irene Graham, the managing director of business finance at the British Bankers’ Association, thinks loans guaranteed by a third party can be a good way to get start-up capital, provided the risks are clearly understood.

“If it supports a business in moving forward and if the guarantors understand what they are being asked to do, it’s a viable option,” she said.

The BBA publishes tips to help companies keep their credit scores healthy. “It’s important to understand what affects your credit score and how you can give yourself more of a chance of securing a bank loan,” said Graham.

Anthony Thomas, a member of the small business division at Lloyds, suggested that anyone prepared to guarantee a loan should consider seeking legal advice first.

“For some businesses, guarantor lending could be a useful option, and we welcome moves by competitors to expand the range of finance available in the market,” he added.

“It is critical that businesses have access to a range of finance if they are to have the best chance of growth.”

Benamor accepts that the sector in which his company works lacks strict supervision. At the moment, consumer loans are regulated by the Office of Fair Trading. From April, the Financial Conduct Authority, the City regulator, will monitor the market.

“Unfortunately the enforcement of existing regulation is too slow,” said Benamor.

“Unscrupulous lenders are taking advantage of this and preying on vulnerable customers before regulation eventually forces them to close.” 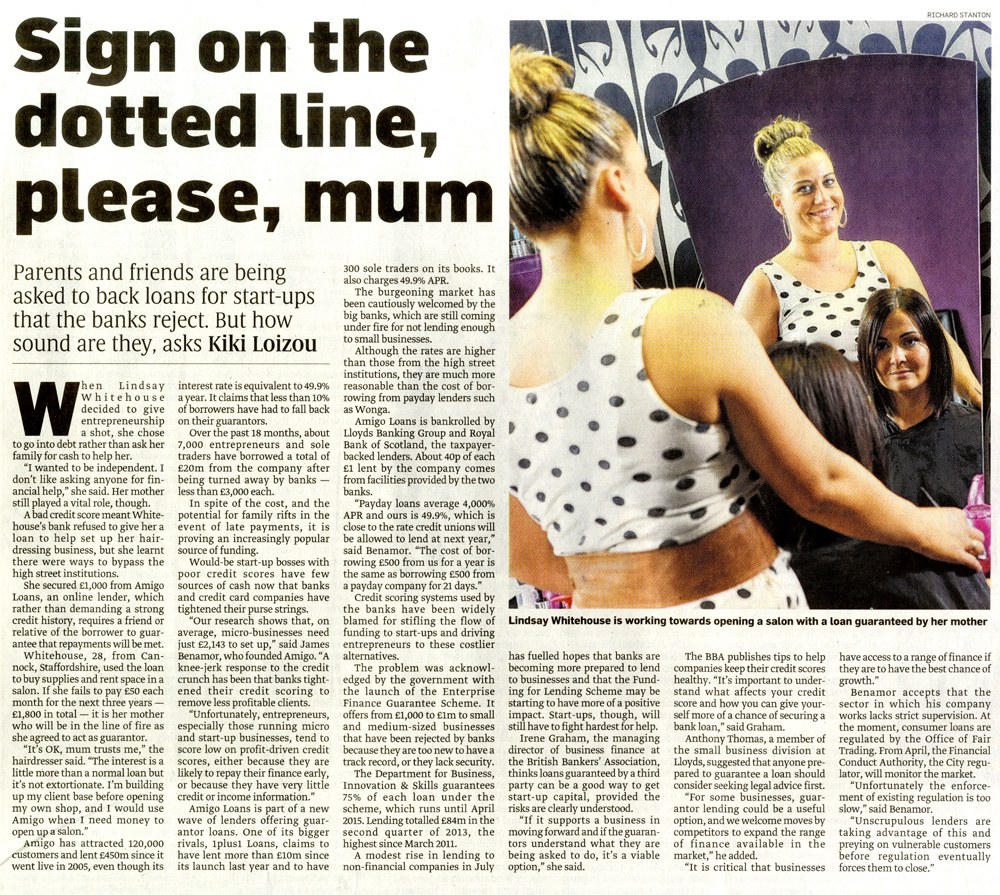